Missy is a very sweet 6-year-old female spayed Ragdoll cat who presented to the Animal Emergency Centre in Hallam (now the Veterinary Referral Hospital Dandenong) over the Queen’s Birthday weekend in June 2019.

Missy’s drama began on Saturday night when her family home caught fire. The fire brigade eventually extinguished the blaze, but the three cats were nowhere to be seen. ‘Toddy’ was found outside wandering around the yard, limping on his right back leg due to burns to his paw. These were treated.

The search turned to Missy and the third cat in the household. With very little left inside the house, Missy was found inside the most burnt-out room, hiding behind a bookcase. Her beautiful Ragdoll coat was badly singed across her entire body; she had singed whiskers and severe burns to all her paw pads, her back legs, and her ears. She was in a right state when she was presented to our emergency vet team, and appeared to be suffering the effects of smoke inhalation along with the burns to her feet. 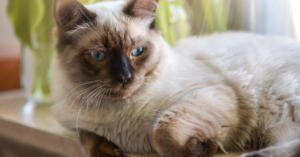 Missy was given strong pain relief and physically examined regarding the extent of her burns. To assist with her breathing she was also placed into an oxygen cage soon after arrival. Missy was admitted to our hospital for 24-hour monitoring and care and treated for smoke inhalation and burns. Smoke inhalation can cause severe damage and swelling to the upper and lower airways and damage to the lung tissue itself. Breathing difficulties can result from this.

After a few days in hospital on treatments, Missy’s breathing had improved remarkably, and arrangements were made to transfer her to her regular veterinarian for ongoing management of her burns. Six weeks down the track, she returned to have her burn wounds reassessed by our specialist surgery department which indicated they were healing well. Missy’s owners found their other missing cat and the three cats were extremely happy to be finally reunited.

For more of our interesting veterinary stories, click here.